I met Karen in the third grade. We grew up together. When we began dating in our senior year of high school, I soon knew that this was the young lady I wanted to marry and with whom I wanted to grow old. During the forty-six years that we were married, I watched her memorizing and applying God’s promises to her life. She loved the changing seasons and often thought of a promise or two from the Lord that she would claim in that particular season.

Then cancer suddenly and dramatically struck our lives. Many circumstances changed quickly; however, her trust in the Lord’s promises did not. I am honored to share what she wrote about being content and trusting Him. I recently found her handwritten note about Hebrews 13:5 and hope that it will encourage and bless you or someone that you know.

Over the years we had several opportunities to consider ministry moves to the State of Florida. Both of us were totally committed to the Lord’s will and were absolutely willing to move if He so led. But that wasn’t His intention for us, and more than once Karen mentioned that she would have to adjust if she didn’t have the change of seasons to enjoy. She most recently viewed her life as being in the winter season. It was hard. It was very hard. But here is a promise that meant a lot to her, and I will include some of her notes that she wrote along with this verse.

“Let your conduct be without covetousness; be content with such things as you have. For He Himself has said, ‘I will never leave you nor forsake you’” (Hebrews 13:5). She circled the word “content.”

Karen wrote: He has promised never to leave me nor forsake me. It is my responsibility to walk with Him and give Him first place in all areas of my life. Colossians 2:6, 7 says, “As ye have therefore received Christ Jesus the Lord, so walk ye in Him: rooted and built up in Him and established in the faith, as ye have been taught, abounding therein with thanksgiving.” This is a choice I made as a young girl believing that Jesus is the perfect Son of God and was sent by His Father from Heaven to earth as the perfect sacrifice for my sin. According to 1 Corinthians 15:3,4 He died and rose again. First place in all areas-Christ’s preeminence (Colossians 1:16). He has promised never to leave me nor forsake me.

Mike’s observation: Karen not only trusted Christ for salvation, the ever-present Christ was very real to her. She intentionally read the Scriptures, spoke often with her Savior, listened to Godly music, thanked Him and praised Him daily, and accepted His plan for her life. This helped her to learn contentment even in the most difficult season of her life. I need this same “contentment.” How about you?

Insights From a Glory-Bound Lady!
Here are some notes taken from Karen Peck's Bible 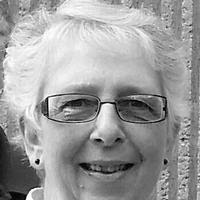